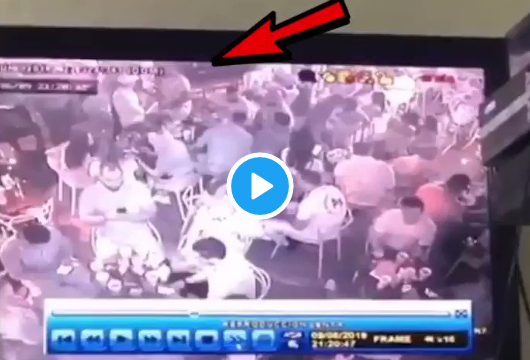 Early reports suggested Red Sox legend David Ortiz was shot in a robbery attempt but the video footage looks a hell of a lot more like an assassination attempt. The gunman clearly came up behind an unexpected Ortiz and fired his weapon. The big question is why? Why on earth would anyone want to kill David Ortiz? Ortiz has done so much for the Dominican Republic as well as the city of Boston. He certainly doesn’t need some lowlife scumbag to take it all away from him. Hopefully this guy gets what is coming to him when he goes to prison. He certainly got roughed up in the streets and the police are not going to protect him from an angry nation. Right now all that matters is Papi makes a quick recovery. Thank god this guy sucks at his job because this could have gone so much worse.

According to CDN News in the Dominican, Ortiz was shot outside a bar in Santo Domingo. Initial reports said Ortiz, 43, was shot in the leg, but CDN later reported that he was shot in the back, with the bullet exiting through his stomach.
Multiple reports, including Ortiz’s father, Leo, and his brother, Eloy, said the Red Sox great is out of surgery. His father said a total recovery is expected.

Surveillance video shows the moment MLB star David Ortiz was shot in the back at a Dominican Republic bar last night. Officials say he's in stable condition after undergoing surgery ?

Here is the actual shooter . Captured moments ago #justice for David Ortiz pic.twitter.com/SHCbs0ELFC

Police in the Dominican Republic are saying the gunshot wound suffered by David Ortiz was not from an attempted robbery, as initially speculated. Alleged video of the incident shows a man walking up to a bar, aiming almost point blank and firing a gun. https://t.co/lFSmXaylum