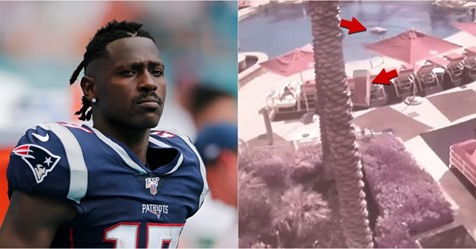 Antonio Brown’s media circus continues. This time the video of his tantrum at a condominium complex has been released and Brown doesn’t seem to care to much for anyone’s safety in the process. In 2018, Antonio Brown claimed it was a false claim when he was accused of throwing furniture over a balcony at The Mansions condo complex in Miami, Florida.
Unfortunately for Brown security cameras caught it all on video. The video shows large furniture falling from the sky in the pool area with residents running away.

According to TMZ:
“AB is being sued by the owners of The Mansions at Acqualina in the Miami area, where he was accused of wrecking his $35k-per-month unit and not paying for the damages. Brown allegedly leased the place from Feb. 2018 to July 2018.

In the lawsuit, the condo owners claim they found broken or defaced furnishings — including a leather couch, silk-covered sofas and appliances. They also claim AB damaged the walls and flooring so badly, they needed to repaint the place.”

Brown is countersuing and claimed that his home was burglarized because of poor security Brown would go on to file a counterclaim against the condo claiming his unit was burglarized in April 2018 due to lack of security and stole $80,000 in cash and a 9mm firearm while he was away.

Brown arrived for his deposition this morning.

There seems to be no end in sight for Antonio Brown’s legal troubles.

WATCH: Troubled wide receiver #AntonioBrown has arrived in Aventura to take part in a videtaped deposition over a multi-million dollar condo battle with his former Miami landlord. @KarliBarnett reports live at Noon.https://t.co/IXpf9aK3Jo pic.twitter.com/EPqDeYzFT2