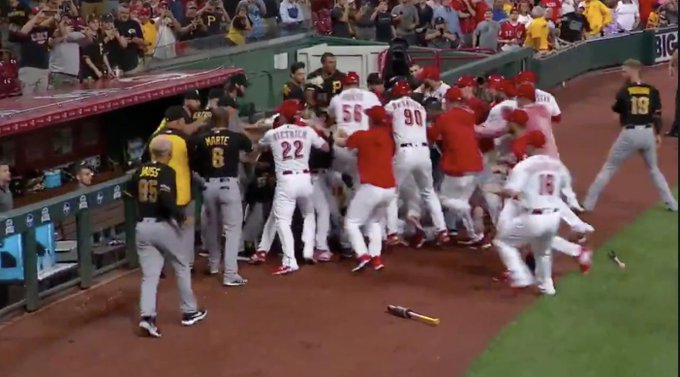 For the second time this season the Cincinnati Reds and Pittsburgh Pirates had a massive bench clearing brawl. There has been a lot of lingering bad blood between the Reds and the Pirates this season. It all boiled over tonight when Reds reliever Amir Garrett rushed the Pirates bench with a flurry of punches. It appeared that he was ready to take on the entire team.

Earlier in the game both teams were taunting each other and it eventually all spilled over on the field.

Some lingering tensions between the @Reds and Pirates have resurfaced.#BornToBaseball pic.twitter.com/lAqU9KPXAL

Tensions between these teams have been high since this bench clearing brawl earlier in the season when Yasiel Puig also challenged the entire Pirates team. Amir Garret was also suspended in the previous brawl.

The police officer is the best part of the Reds Pirates brawl. pic.twitter.com/8IQOp8tlbg

The fight as told by Bob Menery. Warning this version is not safe for work, school or for anyone who is easily offended.