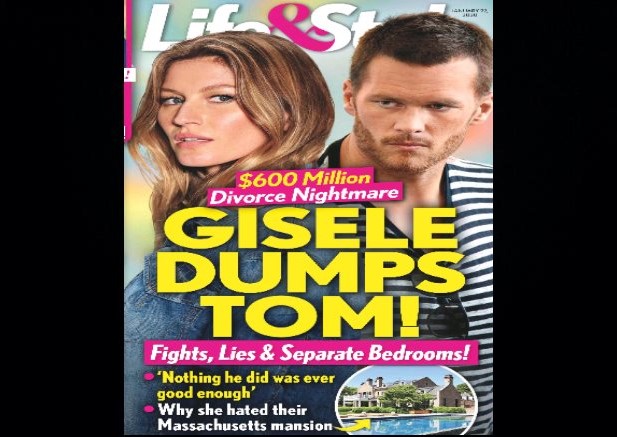 The NFL offseason is still two weeks away, but the only news story anyone really cares about is what Tom Brady plans to do next. Will he be back in New England next season? Did the Brady’s move to Connecticut as reported by WEEI, or is it a hoax according to NBC Sports Boston, TMZ and NESN? Are they even living in New England at all? Numerous theories have come up in the media. Some may ring true, but Life & Style magazine has chosen to jump in the deep end with their upcoming cover story.

Life & Style Weekly are claiming that Gisele has split with Tom with an outlandish headline that says “Gisele Dumps Tom”. Of course this sounds like a ridiculous headline and it seems to come out in the media every year that Tom Brady and the Patriots do not win a Super Bowl. Unfortunately the Brady’s have done absolutely nothing to quell any of the ongoing rumors. A simple IG photo of the new home or post would work. Maybe they are enjoying keeping everything as a mystery. Until then it appears we will have a long offseason full of ridiculous rumors and speculation.

This weeks headline in @lifeandstyleweekly. I want this offseason to already be over and we haven’t even touched the AFC/NFC Title Games yet 🤦🏽‍♂️