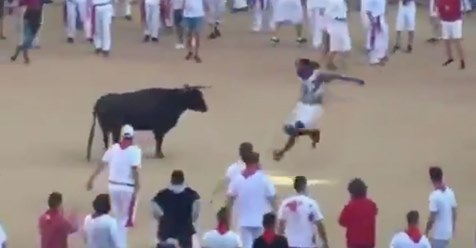 Many professional athletes have injury clause in their contracts so they do not attempt crazy stunts that can threaten their careers during free time. Washington Redskins Josh Norman took it to an all new level by leaping over a bull during a traditional ceremony in Pamplona, Spain every year. Video captured from the event shows Norman sprinting towards a bull and jumping directly over it. To top it off, Norman was wearing a shirt with a picture of a bull on it and wearing a red bandana, the color often used by matadors to supposedly provoke the animals to charge.

Norman certainly was tempting fate considering the NFL season is right around the corner. Somewhere between 50 and 100 injuries are recorded annually at the festival, which features events such as bulls and people running in the streets together and inside a gladiator like arena. Since 1910, 15 people have died.

Redskins CB Josh Norman is out here JUMPING OVER bulls in Pamplona ? pic.twitter.com/QzZhg02Any

A Single Picture can say a Thousand words in 1! with that being said, This picture does that number NO JUSTICE. I would start with ?THOUSAND!!!! as the basement floor! & Elevate from there. ?? #Feedingthespiritthatliesinthedepths#OneoftheGreatestdayeverinmylifetime pic.twitter.com/d67pnSU4R1