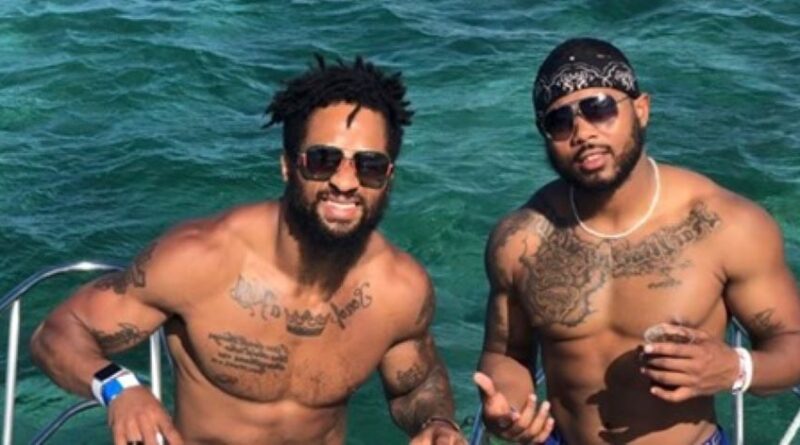 Baltimore Ravens safety, Earl Thomas found himself in hot water with his wife earlier this offseason, and it is certainly the strangest story of the NFL offseason. According to a wild TMZ report, Earl Thomas was held at gun point by his wife, Nina after she caught him cheating on her. Apparently Thomas Thomas’ wife Nina caught him naked in bed with his mistress, but to make matters ever worse and incredibly cringeworthy, she also found Thomas’ brother, Seth also naked in the bed with another woman.

“Nina claims Earl, 30, left their home earlier in the day after an argument over the NFL player’s drinking. She claims Earl’s brother, Seth Thomas, picked him up.
But, a short time later, she decided to check on his whereabouts by logging into his Snapchat account — and that’s when she says she found video of Earl with another woman.

Nina says she used Earl’s Snapchat account to track his location to a nearby Airbnb rental home … and says she called up two other women to help her confront Earl at the pad.”

Things only got considerably worse when his wife Nina grabbed Thomas’s gun and pointed it at his head.

“Nina also claims she grabbed Earl’s pistol, a 9mm Berreta, in the process with the intention to “scare him.”
When the women arrived at the house, they “discovered Earl and Seth naked in bed with other women.”

That’s when Nina admits she pulled out the gun and put it to Earl’s head — stating “that she took out the magazine thinking that the gun could not fire.” But, cops say Nina was “unaware that the gun had a round in the chamber.”
Cops say one of the women in the house shot cell phone video of the incident … which they say shows Nina pointing the gun at Earl’s head “from less than a foot away and it can clearly be seen that Nina’s finger was on the trigger and the safety is disengaged.”

Fortunately for Earl, cops say the Ravens defensive back was able to wrestle the gun away from her.
In an interview with Earl’s alleged mistress at the scene, she claimed Nina also threatened her and the other woman in the house — pointing the gun at them and yelling “I got something for all you hoes!”

When Snoop Dogg said “It Ain’t No Fun, if the homies can’t have none”, I don’t think that is quite what he meant.

#Ravens safety Earl Thomas says there will be a report coming out tomorrow on TMZ regarding a domestic incident with his wife. He doesn't give much information but wanted to get ahead of the story. Video via his IG...pic.twitter.com/8xE6UdKHpz

Eastbound and Down Quote of the Day: “I got two hard rules I live by, pop: I don't fuck with the Devil, and I never do tag teams with blood relatives.”