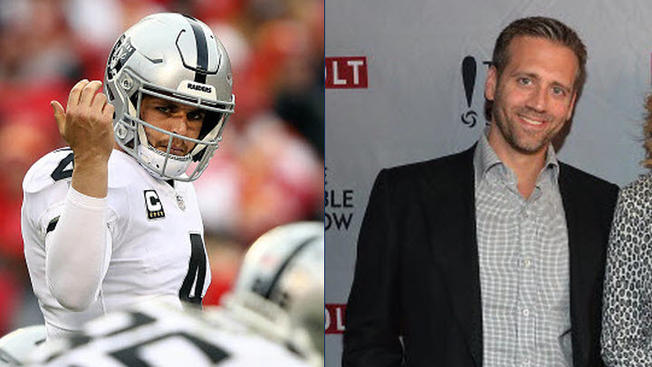 Derek Carr vs. Max Kellerman on the next UFC main card? The Raiders’ quarterback seems to be campaigning for just that.

“You can see when a quarterback don’t want it,” Kellerman says. “Carr didn’t want it.”

“I think Gruden knows they got to move on and the question is, can they get anything for him? Is he a placeholder until they find the next guy? How long will it take to develop the next guy? And Kyler Murray, if you could grab him in the draft, hell yeah.”

You can listen to the clip below.

Wait for it. #Raiders pic.twitter.com/tVBjtvJvEW

@ufc @danawhite hey how do I challenge a couple of these clowns on tv to a fight? I think we should start a business together. Where pro athletes can challenge some of these people to an octagon fight until they give us an answer…. You don’t know me… stop lying.

Whether Carr was more angry with Kellerman’s take that he “didn’t want it” last season or the idea that Gruden doesn’t want Carr long term, it’s clear Carr is furious with a show that his head coach has also been displeased with in the past.

And just when you thought the feud was over, Kellerman’s arguing partner, Stephen A. Smith, chimed in with a personal invitation to Carr.

Hey @derekcarrqb…..I heard you had a few things to say. Consider this a personal invitation. You are more than welcome to come on @FirstTake or sit down with me for a 1-on-1. I’m here, Bro! Nobody hiding.