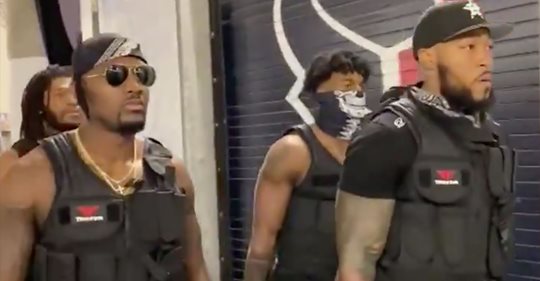 The Houston Texans are going to need to do a better job if they are going to intimidate the Patriots. The Texans linebacker core decided to dress as a swat team. In reality they look more like a bunch of male strippers. Bill Belichick is going to have a field day with this shit. All they did was feed coach Belichick some pregame billboard material that I am sure he will use against them. You don’t see champions like the Patriots going through ridiculous lengths to intimidate their opponents. All the Pats have to do is show up on the field. The Patriots will probably beat them by 30 now.

Look the part. Play the part. @HoustonTexans Linebackers a.k.a SWAT team are ready for the @Patriots pic.twitter.com/mVgofF39PX

How Texans linebackers will leave after facing the Patriots: ? pic.twitter.com/Hni3QISAph