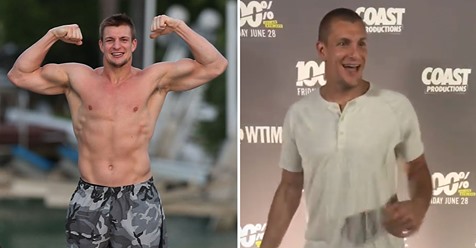 I know many of us Patriots fans were holding out hope for a late season return from Rob Gronkowski, but judging by his appearance last night for the premiere of Julian Edelman’s new Showtime documentary, we should probably set those dreams aside. Gronk is looking lean after losing a lot of weight since hanging up his cleats a few months ago. He probably isn’t looking to go into professional wrestling anytime soon either. As much as I would love to see Gronk back on the field, he is looking healthy and is probably feeling great. He has nothing left to prove on the gridiron as he is a sure fire Hall of Famer and will forever be a legend in New England.

Gronks on that vodka soda diet